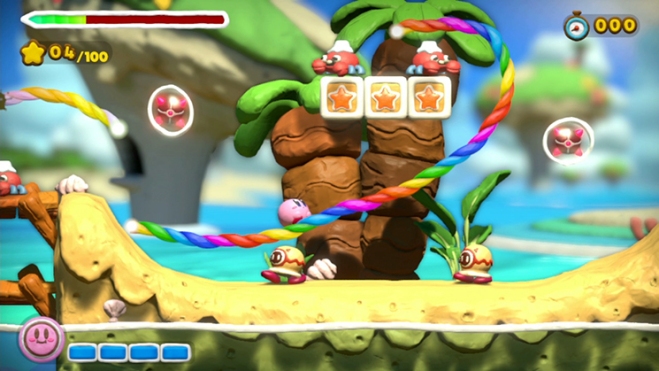 Kirby may be Nintendo’s most under-appreciated mascot. In addition to a series of mostly excellent platformers, the pink puffball has been the star of many of Nintendo’s biggest experiments. He’s been a pinball and a puzzle piece, starred in minigame collections, been turned to yarn, and was featured in Nintendo’s first tilt-based game–years before the Wii. Perhaps the most successful of these experiments was Canvas Curse, an early DS game which was the first to make a compelling argument for touch controls.

Now Nintendo has revived that concept for the Wii U and dressed it up in a beautiful new clay aesthetic. As with the original, you draw lines on the touch screen to guide Kirby around the various levels, but beyond your ability to tap him for a dash attack, you’ve got no direct control. Unlike Canvas Curse, here Kirby doesn’t have his trademark ability to copy enemy powers–instead, it’s been replaced with a block-breaking charge attack that you can use after collecting a certain number of stars.

A game of this nature lives by the strength of its levels, and the level design in Rainbow Curse ranges from okay to incredible. The first few stages are pretty standard and uninteresting, but the game gradually ratchets up the creativity and difficulty until by the last couple of worlds I was being constantly delighted by new mechanics and challenges. There are some occasional missteps–notably, the boss battles, none of which are particularly interesting, one of which is an exercise in frustration, and each of which is repeated in more difficult circumstances later on. 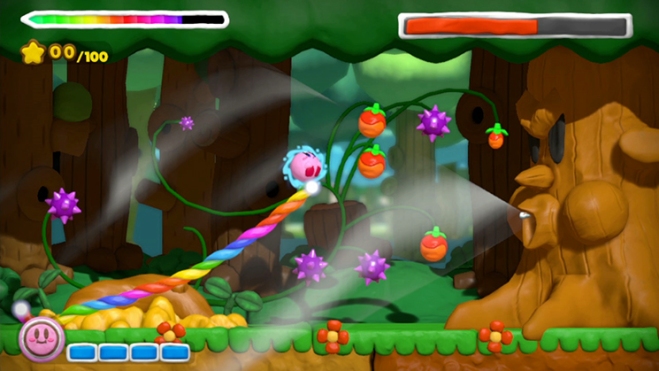 The game only has about 20 stages, and it takes about a third of that before the game opens up to show its quality. The second half of the game is wonderful, full of surprises and unique mechanics, but the game can easily be finished in 4-5 hours–so that means there’s really only about two hours of truly exciting content.

And Rainbow Curse’s additional content doesn’t really offer a compelling argument to come back for more. There are collectibles which unlock figurines to look at and music for a soundtest mode, but that hinges on your desire to go back and repeatedly explore the game’s small number of levels. There’s a challenge mode, but its bite-sized time trials don’t really offer the same thrills that the main stages do. There’s a co-op mode in which up to three other players can take up traditional button controls to help out through the entire story–but they mostly just get dragged along as Kirby quickly bounces and flies through the stages. That is, when they’re not having their path blocked by the primary player’s drawings. 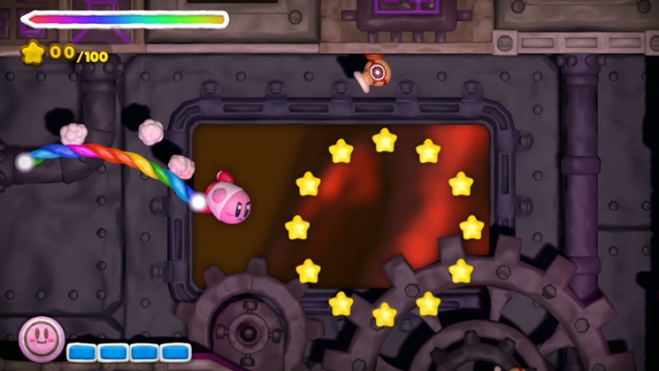 It’s also worth noting that while the game’s claymation visuals are beautiful both technically and artistically, it’s tough to enjoy them while you’re actually playing. Because the game requires you to be extremely focused on exactly where you’re drawing, you have to spend most of your time looking at the low-resolution screen on the gamepad. I eventually had to turn off my 50-inch TV to focus on the tiny, 6-inch touch screen, which did the game’s visuals a tremendous disservice.

Kirby and the Rainbow Curse has provided some of the most fun I’ve had gaming this year, but this is an extreme case of quality over quantity. The game’s few little missteps–a slow start, poor boss battles, and lackluster extra modes–really stand out when there’s so little content. I love a lot of what Rainbow Curse does, but it’s a tough sell when there are so many nagging issues hanging over it.

Kirby and the Rainbow Curse Review