Stretchmo is a joyful collection of bite-sized puzzle challenges which stretches the Pushmo concept into what feels like its logical conclusion. It succeeds in expanding upon that original concept in a way that the previous sequels have not, and basically just gives you more Pushmo with new mechanics to use, which is a definitively Good Thing.

Pushmo was a sudden, delightful surprise when it was released in 2011, and it’s since become one of Nintendo’s most prolific series. The joy of interacting with these puzzles is in their physicality. You control an adorable sumo wrestler puppy thing as you attempt to push and pull a structure of variously-shaped blocks into a configuration that allows you to reach the goal at the top. Your place as an actual character in the same physical space as the puzzles grounds and contextualizes your interactions with them, which ensures that the game remains charming and fun even as you trial-and-error your way through each puzzle.

Stretchmo’s new consideration is the ability to stretch blocks out from the side, which allows the puzzles to inhabit a more complex space. 2012’s Crashmo attempted a similar expansion into three dimensional space, but I wasn’t overly fond of it, because its puzzle pieces were so intricately linked that a single wrong move could cause the entire structure to fall apart and force you to restart from the beginning. That in turn forced you toward more abstract, five-moves-ahead thinking, which robbed the game of the simple joy of jostling pieces back and forth until you found the way to proceed. Stretchmo is a more natural extension of the original game’s mechanics, as it maintains a relative simplicity where the results of your actions are immediately apparent, and you can easily remedy a mistake by just retracing a couple steps and correcting a block’s position.

The other new consideration with Stretchmo is its release as what Nintendo calls a “free to start” game. You download a free shell of the game from the eShop, which contains a smattering of tutorial levels and a bunch of robotic salesmen who want to sell you “tickets” to the various attractions in Stretchmo Land. Nintendo’s propensity to cast in-game characters as shopkeepers selling content for real-world money (as seen in the StreetPass Plaza and Rusty’s Real Deal Baseball) is still equal parts weird and endearing, but the end result is that the game offers a variety of puzzle styles in order to entice you to buy each piece. Or your robotic huckster is more than willing to offer you a deal on ALL FOUR games for one low, low price…

Sarcasm aside, the total package compares favorably to the previous games in terms of cost and content. And splitting the puzzles into four different segments has allowed for a greater variety of styles between them. Mallo’s Playtime Plaza offers the basic ‘Mo experience with 100 levels of gradually increasing challenge and scope. Poppy’s Sculpture Square presents structures built to resemble various animals and objects. Corin’s Fortress of Fun is perhaps the most mechanically interesting, as it features enemies and challenges that test your timing, which makes it feel very unique both in this package and in the series as a whole. Finally, Papa Blox’s NES Expo offers puzzles shaped like Nintendo characters and NES sprites–and also features the greatest challenges, because Papa Blox is the realest mug in the Pushmo game. That’s 250 levels all told, and, of course, purchasing (and completing) all four earns you access to a final area filled with even greater challenges. 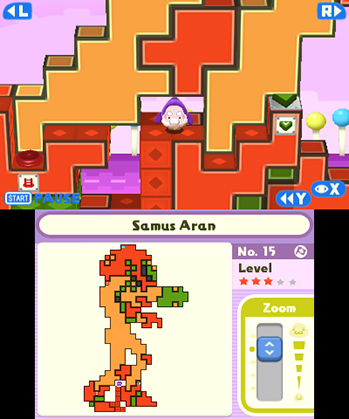 As with the previous games, there’s an intuitive level editor in which you can create your own puzzles. It’s fully featured to the point where it seems you could create anything that exists in the base game, but there’s no infrastructure for you to share your creations. Instead, the game spits out a QR code, and it’s up to you to share it on the media platforms of your choice. Obviously, this also means you have to seek out forum posts and Tumblr blogs if you want to see any user-generated levels for yourself. Pushmo World on the WiiU had a fully integrated level browser, and it’s a shame that couldn’t be rolled back into the 3DS games.

I’m tempted to call Stretchmo the best game in the series, but that’s overselling it a bit. It expands on Pushmo’s mechanics and is far more successful in doing so than the previous attempt. It’s not fundamentally different, but it feels like a logical extension of the original gameplay as its unique elements offer new ways to think about those mechanics. It’s the same charming, playful fun that the series has offered all along.